£200 donated to Children in Need in buzzing Melton 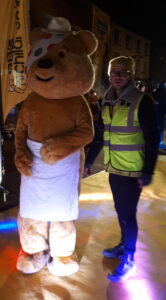 On Wednesday evening, a huge crowd turned out in Nottingham Street, Melton to cheer on the participants in this year’s Rickshaw Challenge who raise money for Children in Need.  During our Ladies’ Scary Scramble, which took place on Friday 25th October, part of the funds raised were earmarked to donate to this very worthy cause especially as it was coming to our local town.

Nottingham Street was packed and bitterly cold, but thankfully dry.  All the cyclists were there and it was Adelle who rode the Rickshaw into sight.  Matt Baker introduced the town live on air to loud cheers from the thousands who had turned out and worked his magic, interviewing and chatting to guests, including the local scouts. Dickinson and Morris supported the event with specially baked pork pie and mince pies and the ‘real’ Pudsy joined in the fun with his hat and hairnet (check out the photo!)

It was a privilege to attend and to be able to donate the money raised from the club, even if it was with Pudsy’s cousin!