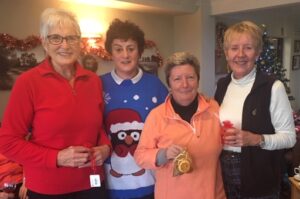 On Sunday 8th December, 18 Ladies gathered to play in the 9 hole Christmas fun competition.  Teams of 3 set off and, despite the heavy rain of the previous days, the greens were holding up well.  There were team and individual prizes to be played for.  The team game was a Stableford format with 2 scores to count and 3 scores on each par 3.  An additional bonus point was gained for chipping in or a one putt, which proved a popular way of gaining extra points.  In addition, each team had a pack of 5 animal cards that they had to try not to accumulate – the snake for a 3 putt, the bear for an out of bounds, the monkey for hitting a tree, the frog for finding the pond and the camel for visiting a bunker.  The individual player in each team who had most of the 5 cards on the 9th green collected a booby prize.  It made rooting for your team member tricky as on the one hand you wanted a good team score, but on the other hand a three putt would mean that you could get rid of your snake card to another player.  Team winners with a superb score of 44 were Dee Hughes, Liz Snow and Maureen McCall. 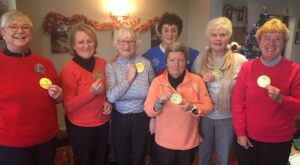 The six animal prizewinners were Avis Webb, Dee Hughes, Jackie Fisher, Joan Allen, Jean Moulds and Julia Brown.  However, they were delighted to receive a gold chocolate coin from the Tower of London as punishment for a less than perfect round.