Honours All Round on Senior Presentation Night 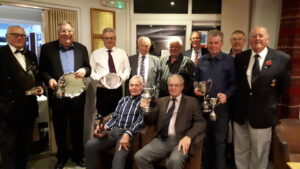 On Monday evening, 48 people enjoyed a two course meal and the chance to take part in the Senior Presentation evening at MMGC.  The honours were shared out between eleven different players although some had managed a doubly successful outing, winning twice in the season.  After the trophies had been duly handed out, the beautiful flower arrangements created by ‘Drina Terzza were auctioned off, raising over £130 for the Captains’ Charity, East Midlands Immediate Care Scheme (EMICS).  The winners and runners-up were as follows: