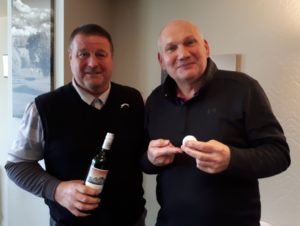 On Sunday 7th April, the sixth and final Autumn Trophy competition took place.  After early morning bacon cobs, 34 players set off in a pairs competition and, in the field, there were 10 competitors with a chance to come out on top, so it was still all to play for.

The format was one score to count on the odd holes and both scores to count on the even holes, putting all players under pressure at different times.  Although the weather was a little cool, there was only a soft breeze and the fairways and greens were running well.
Top scorers on the day with an astonishing and unbeatable 65 were James Denny and Mark Lewis.  Mark was also closest the pin on the par 3 16th.  Both these players gained 10 points for coming first, but it was not enough to catch the overall winner across the whole competition. 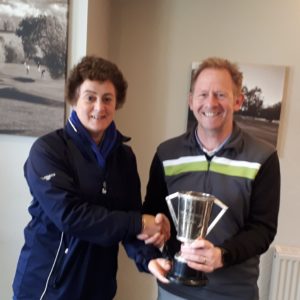 Winner of the Autumn Trophy for 2018/2019 was Paul Gough with an excellent 34 points.
Lady Captain, Nancy Denny, congratulates Paul Gough on his excellent win.