Congratulations to Steve Burton – winner of the RWS 2019 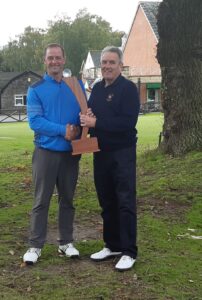 On Saturday 19th October, the RWS final took place at Woodhall Spa on the Hotchkin course. This event followed 24 competitions over the year at MMGC and a recent 30 man playoff at Melton Golf Club to produce the final 6 players.  The format for the day was an individual Stableford played off a full handicap. The golfers teed off straight into a light cool breeze, accompanied by a very light drizzle, which soon dissipated. The condition of the course was excellent with  manicured fairways, receptive and slick greens.

After 6 holes, the scores across the 2 groups were very close. However, after 9 holes Steve Burton on 22 pts and Ian Townsend and Tony Robinson on 17 pts started to pull away from the rest. A late run of consistent golf by Ben Manship and Mick Cavani made the 3rd, 4th and 5th place a very close finish. As the competition continued, Steve Burton moved even further ahead whilst the others were grouped closer.

From the 14th Steve was out on his own and setting scores for the others to try and emulate. Highlight of the day was Jack Griffins who drove a 300 yard drive onto the par 4 15th.  Although not scoring on the 18th, Steve was far enough in front to win.

The final 6 on their way to Woodhall Spa are…. 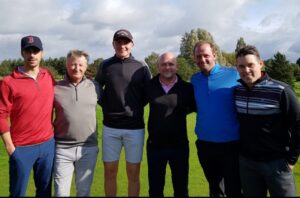 So – all over for another year.  Did you make it?

Congratulations to Chris Radford for his superb second win of the season and to Paul Hackett who amassed enough points to make it into the top 30.  So now it is all down to the Shoot Out scheduled for Sunday October 6th….

Here are the full results from Saturday:

Sunday Stableford – it is nearly all over…..

Congratulations to Paul Gough for his win, the 17th different winner of the season and he scoops the 400 points. Congratulations also to Tony Robinson, who now cannot be caught at the top of the leaderboard.  His place at Woodhall Spa is assured.  The situation at the lower end of the Top 30 is much tighter with 20 players in with a shout.  The final event is this Saturday…..

Well done to Mick for his excellent finish, allegedly despite a 9 on the first hole he posted a superb nett 66 to win on countback from Danny Raven.  Only 2 more competitions to go so here are the results from Friday…..

President’s Putter Round 2 and Compton Cup Round 5

Well done to those who braved the terrible conditions last Saturday – gales in the middle of August.  Of course this is the UK, so anything goes for our summer, but it did make for a challenging round.  The combined scores are here as well so, with just a few rounds to go, the top 30 is beginning to look settled:

Here are the results for Round 2 and the combined results:

President’s Putter Round 1 and Compton Cup Round 4

Well done to Richard Faubert who came in with a super nett 67 to clinch top place.  He gains 400 points, but don’t forget – round 2 next Saturday and the chance to win 600 points across both rounds.

Well done to JP O’Reilly who won on count back and came in well under handicap.  Conditions must have been favourable as 12 players came in under handicap.  The next two competitions are the President’s Putter which are worth 400 points individually and 600 for the overall winner….good luck.

A superb round by Chris Radford scoring 42 Stableford points set him up for the top score.  However, it all depended on the performance of the Professional he was paired with from the Open in Portrush.  Luckily for Chris, Matt Wallace came in with 72 which meant Chris had a total of 30 and secured the first place.  Here are the rest of the results…

Jonathon Wade collected himself 400 points with a super nett 67 closely followed John Webb and Stephen Draisey on nett 68.  For a list of the full results see below:

Well done to Neil Wigman who came out on top on count back from Andrew Blunt both with 39 points.  That gains him 300 points and there is still all to play for with two competitions this weekend.

Congratulations to David for an excellent score and win. The 600 points for the major has put him into 11th in the Order of Merit. There are 3 comps this week: a midweek Stableford on Wednesday 17th, then a Medal on Saturday (Abbot’s Trophy for the over 55s) and The Goodacre Rosebowl on Sunday 21st.

To catch up with the rain affected schedule, two competitions were played in quick succession. On Thursday 27th June there was a midweek medal and Simon Snow came out on top.  Just two days later, on Captain’s Day, the format was a Stableford qualifying event and the last pair out came in with the best scores.  Congratulations to Danny Raven and Kris Owen and here are the full results from both days….

Time to get back on track after the rain

This Saturday saw almost 100 gents fight it out for the Petfoods Trophy and the Compton Cup round 3.  The top prize of 600 points went to Matt Catton with an excellent nett 66 ocb, with Jack Griffin collecting 450 points for his nett 66.  Tony Robinson’s 3rd place with a nett 67 has now shot him to the top of the leader board.

Next week, there will be 2 RWS events to try to catch up:  Thursday 27th is a midweek medal and Saturday 29th during Captain’s Day is an ordinary competition with 400 points to the winner.

Danny Raven’s 63 puts him top of the Leader board

In this Saturday’s medal competition, which was a three tiered event, Danny took pole position with a commanding nett 63.  There were several great below par performances and 30 golfers shared the twos sweep – showing the quality of play!  Here are the full results:

Congratulations to last year’s winner, Ian who is showing early promising form.  This win takes him to top of the leader board.

In the first prestigious event of the season, several players carded excellent scores against the course in this bogey competition and Mick took the tope prize on count back.  Six players beat the course and Mick and Tom Smith were both +3.   The next opportunities to score will be in the medal on Friday 17th May and then on Saturday 25th May.

The second event of the season in the Race to Woodhall Spa was a midweek Stableford on the 3rd May.  The conditions were changeable and extremely windy, so Ben Manship scored an excellent 39 points to take the 300 points on offer.  Second was Phillip Gray with 38, netting him 200 points and third was Geoff Townsend with 37 and 150 points.

The next qualifying competition is the Marsh Cup on Saturday 11th May, with 600 points up for grabs for the winner and extra points to the top 30 places.

First Result of the season goes to Mick Cavani

So here we go again on the race to Woodhall Spa and Mick has made an excellent start, gaining himself the top score of 400 points.  On a gusty and rainy Saturday, the conditions were not perfect, but the monthly medal and PGA Pro-Am qualifier proved to be a great day for some.  Mick Cavani came away with a nett 66 and 400 points for first place.  In second place with a nett 69 was Neil Farish, worth 300 points and in third place with a nett 71ocb and worth 275 points was Oliver Duley.