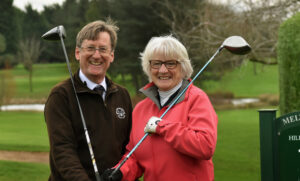 John and Jackie, Captains for 2020

Gerry Stephens and Nancy Denny, the Melton Mowbray Golf Club outgoing Captains for 2019, handed over the reins to the new Captains John Harvey and Jackie Fisher on Sunday 26th January. The day started with the  customary meet and greet, followed by both incoming Captains going to the first tee to hit a ball as far as they could down the fairway. Both their distances were recorded for members to guess at a £1 a go and the winners receive half the money raised and the other half going to the Captains’ charity.  Incoming Lady Captain Jackie Fisher hit a superb drive with the combined total being in the region of 280 yards. 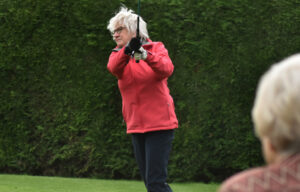 The Drive-In continued with speeches from the President, new and past Captains and a handover ceremony of photographs. Both outgoing Captains thanked everyone that supported them throughout their tenure and who gave so generously to raise a fantastic amount for their charity East Midlands Immediate Care Scheme (EMICS) and their Captains’ fund. The outgoing Captains were presented with their photograph and the incoming Captains’ photographs were sited on the club wall. 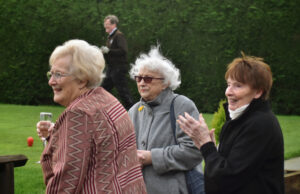 The new Captains announced their charity for this year, which will be Headway Leicester, a charity providing support to brain injuries.  The procedure was concluded by the outgoing Captain Gerry Stephens presenting the incoming Captain John Harvey with his club blazer. Everyone attending the event were then treated to  wonderful hot buffet courtesy of the new Captains.